The Drain Academy was built in 1883.  The I.O.O.F. purchased the building in 1893 and the Central Oregon Normal School was established.  The north wing was added on in 1905 as student attendance had grown to 150.  The school was closed in 1908, and moved to Monmouth in Polk County.  The population of Drain dropped to 350 shortly after the move.

The elementary and middle school now occupy the site where the original Normal School was built.  The school district has about 500 students in grades K-12.  This district office is in the “Drain Castle.” 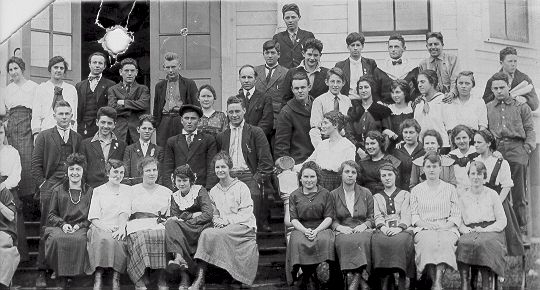 Above photo of Drain High School students in 1918.

E.W.D. Taylor
The following is a portion of his biography.  “Following graduation from the University of Minnesota in 1898, I followed the profession civil engineering until 1916.  Tiring of the rough life and hardships, in 1916 I attended the University of Oregon Eugene, to prepare for training.