This house provides the finest example of the proportion and ornamentation characteristics of the Queen Ann architectural in the city.  This building is listed in the 1976 Statewide Inventory of Historic Sites and is also listed in the National Register of Historic Places.

Construction was begin in 1893 and completed in 1895.  The house has major historical significance to Drain as both the city’s most imposing residence, and it’s most visible link with the founding family.

Design source for the Victorian house is attributed to George Barber of Tennessee.  It is Barber’s design No. 37, and the cost estimate to build in the 1890’s was $2,600.  The Hasard House in Drain which was built in 1902 is of similar design as is the Fullerton House in Roseburg, Oregon.  The Fullerton House was owned by the Drain family attorney.

The Charles Drain house is a two story, wood frame structure with an attic built on a foundation of brick surfaced with stucco.  The main portion of the building is covered with shiplap siding, but shingle siding was used for a bell-cast course and a corner tower.  The house is asymmetrical in plan and has a variety of wings which project from a central, hip roofed volume, with porches, balconies and bays on its principal facades.

The entryway is marked by an elaborately finished gable-roofed side porch with a horseshoe arch set inside it/s framework and a corner tower with a conical roof.  A central stuccoed brick flare top chimney and a pyramidal roofed porch atop a polygonal bay on the west face are important features above the eaves.  Jig-sawed vergeboard decoration of the various gable ends is elaborate, employing pierced or cut-out motifs as well as spindle work.  Spindles and balusters with ornate turnings are abundant along with porch and balcony trim and railings.  Window openings employ one-over-one double hung sash and are typically grouped in pairs or triparte arrangements.  The foundation is crowned with a ground course consisting of framed vertical boards and panels beneath the window openings.

The house is now owned by the North Douglas School District.  During 1995-1997, a citizens committee raised $80,000 to restore the house. 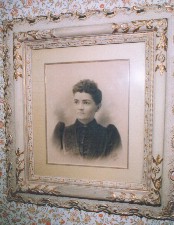